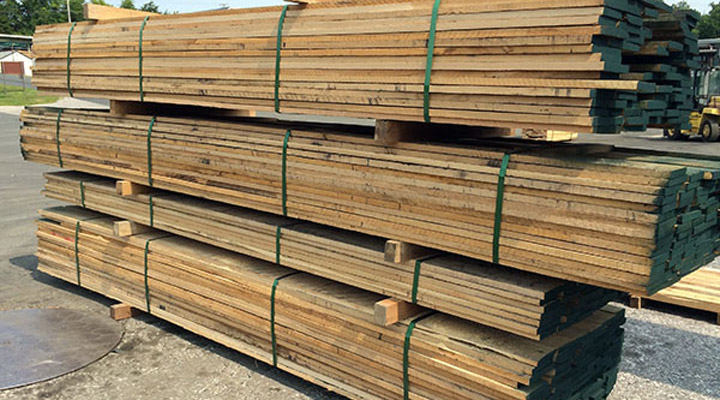 If you live in North America, it’s probably no surprise to you to learn that Maple is one of the most widespread species on our continent. It can be found in just about every region, and two of the most common species are Hard Maple and Soft Maple.

Hard Maple can also be referred to as Sugar Maple or Rock Maple. Often used for flooring and cabinetry applications, this blond-colored wood coordinates well with almost any décor style. The fine pores of Hard Maple offer a tight grain, and its sapwood is nearly white, making it unique among other lumber species, in that its sapwood is almost as sought-after as its heartwood.

Hard Maple’s high degree of hardness and density translates into crisp, hard edges in mouldings; however, the same characteristics can make the species hard on tools. Because of its high degree of stability, Hard Maple is ideal for flooring; at the same time, its tight grain resists most types of finishing. Dyes, wax, or stains are unable to penetrate the surface, making surface film options such as lacquer or varnish preferable.

Both Hard Maple and Soft Maple can produce a variety of special effects when it comes to grain. Each is highly prized by certain craftsmen, including those who make instruments and furniture. At the same time, Figured Maple is useless for cabinet makers and flooring professionals who prefer uniform grain. The following are examples of specific types:

• Curly Maple: The ripples create a 3D appearance, making the grain appear to have curled. Curly Maple is most obvious in quartersawn boards and can also be called Fiddleback Maple for its traditional use in making instruments.

• Bird’s Eye Maple: Produced by unfavorable growing conditions, it’s created when trees try to start new buds in order to get more sunlight. The aborted shoots produce tiny knots, or “bird’s eye markings,” which are most noticeable when the lumber is flatsawn.

• Spalted Maple: “Spalting” refers to partial decay and creates dark streaks where fungus has attacked the wood. If wood is rescued early enough, the lumber is still usable with no rotten wood.

In order to serve our various customers, J. Gibson McIlvain carries a large inventory of Maple and separates figured boards from straight-grained ones.

We have provided premium lumber for noteworthy projects around the world, including celebrity estates, the White House, Supreme Court building, the Capitol building, and Smithsonian museums. END_OF_DOCUMENT_TOKEN_TO_BE_REPLACED